At 4:30 on a Saturday morning, when most other people are blissfully enjoying the opportunity to sleep in, Kreg Gruben lies awake with an idea to fix a problem, and not an easy one at that.

Professor Gruben is director of the Neuromuscular Coordination Laboratory and Associate Professor of Kinesiology at the University of Wisconsin – Madison. Leveraging more than twenty years of experience studying the mechanics of walking, Gruben and his team of undergrad and graduate students are developing a new device called KIINCE (KEEN-say) intended to retrain the fundamentals of walking in the aftermath of a stroke or other neurologic injury or disorder.

Gruben asks us to, “imagine that if every time you took a step you actually had to think about it.” Though walking may seem easy, it takes complex control of many muscles to remain upright and step normally. Now imagine that this intricate set of controls has been disrupted by a stroke.

As researchers, we shouldn’t be discouraged by the notion of taking a concept and turning it into a product because it seems daunting.   -Kreg Gruben

At first glance, the Kinetic Immersive Interfaces for Neuromuscular Coordination Enhancement (KIINCE) resembles a treadmill, but with highly sophisticated software, robotics and sensors, stability harnesses, and a game-like interface that provides feedback to the patient. Though KIINCE’s initial use will be to help stroke patients, the product has wider potential application. Says Gruben, “KIINCE’s core technology provides a novel feedback loop through software to guide users to drive a normal walking pattern.” The device has the potential to target neurological disorders and injuries to treat the millions of people in need of effective gait restoration therapy.

The original patent application describing the KIINCE invention was filed in 2005. However, Gruben’s invention may never have realized its commercial potential if not for the resources available through D2P. “The experience with D2P spurred me to move beyond just doing basic research in walking mechanics and out to the rehabilitation community to treat actual stroke patients.” 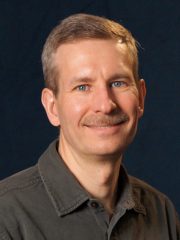 What advice does Gruben have for other UW inventors? “As researchers, we shouldn’t be discouraged by the notion of taking a concept and turning it into a product because it seems daunting. The resources at D2P, such as industry experts John Biondi and Trevor Twose, are there to smooth the transition from workbench to product and help us navigate the process. Commercialization should be primarily viewed as a valuable opportunity to readily translate our work into practical applications for which D2P serves as a catalyst.”

KIINCE’s future is indeed exciting. They were named a top place finisher in the Governor’s Business Plan contest last summer and debuted an early prototype of the device at the Discovery Center’s health symposium in the fall. Next steps are a move to Research Park and continued training with stroke patients to finalize product features with the goal to commercialize the product for the U.S. market.

As for waking up early on a Saturday to mull a new idea, does Gruben mind? “No, that’s just how I operate, and it works. I suspect there are a lot of other inventors and scientists who are the same. We’re driven to solve problems. In our case, the solution is coming into view pretty quickly.”