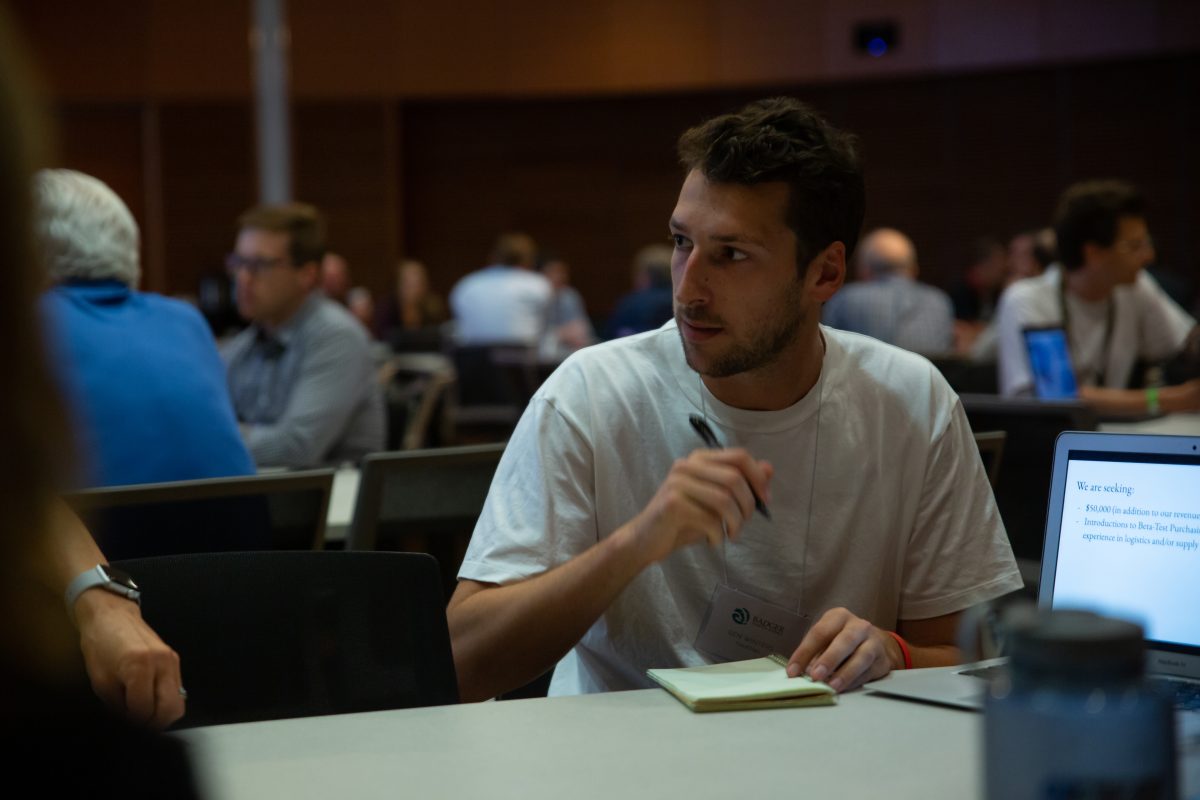 UW–Madison alum Ben Winters ‘20 and his co-founder Jake Levitt worked with D2P to help launch FoodChain during the last year of Ben’s undergraduate degree program in the School of Business. Their idea was to connect farmers, suppliers, and consumers with an innovative online marketplace. Enter FoodChain, a platform that allows producers to list, advertise, and sell their products in new markets while purchasers can browse an active inventory of local foods and have all their products consolidated into a single purchaser order and digital invoice. FoodChain was recently acquired by the Dohmen Group, where Ben and Jake continue to be closely involved.

In the summer of 2019, Ben, Jake and team member William Finn took part Discovery to Product’s Igniter program, a free non-credit course that helps faculty, staff, and student innovators bring ideas to the marketplace. “FoodChain was a really interesting start-up,” says Kieran Furlong, who serves as one of the mentors for the project. “Who doesn’t want local, fresh food? Yet, this is something that is incredibly hard to make happen. Ben, Jake and William were willing to roll up their sleeves and really get stuck in to figure out why that wasn’t happening. By focusing on the frictions in the existing food-supply chains they were able to plot a successful course for FoodChain, which ultimately led them to their acquisition.”

We sat down in August 2020 to talk to Ben about FoodChain and get his insights to share with other campus innovators.

You graduated from the B-school this past spring with a degree in marketing and a special focus on entrepreneurship. What drew you to attend UW–Madison initially?

I’m from Westchester County, New York, and I didn’t know anything about Wisconsin growing up. I think I visited UW–Madison on the warmest day in March history—it was really nice, so that helped! I was deciding between a couple of the larger business schools. When I visited campus, I talked to some of the students in the café at Grainger Hall, and I remember there being a total lack of ego. I liked the idea of an environment where everyone works together, and it wasn’t so cutthroat. It also seemed like a place where there was a balance between a strong academics, really nice people, and fun. Choosing UW–Madison was one of the best decisions I made in my life.

Where did the idea for Food Chain come from initially?

My cofounder Jake actually thought of the idea. I was already working on a different project from the previous summer, focusing on trying to make some sort of way to combat air pollution. Coming up with a business idea that makes money can sometimes have negative environmental impacts, but I was really passionate about finding a way to do the opposite. Jake approached me because he is more a finance background and he knew I was interested in entrepreneurship. He shared his idea, and we started to chat about the amount of waste in the food supply chain and the fact that the whole industry is really not that tech savvy. From there, the idea for FoodChain was born. We took part in multiple accelerator programs that helped us to craft a profitable and functional business plan, and that eventually propelled us to grow faster.

You took part in D2P’s Igniter program. What did you learn?

D2P really helped us pull everything into an organized idea. When we walked in, we thought we were going to hit it big with FoodChain, but we had nothing formulated. It was all just ideas in our head. So, one thing D2P did was help us make our business more structured. The system of doing independent work and then reporting back to the rest of the class was super important. I remember thinking about everything from figuring out our total addressable market on day one to how we were going to negotiate with investors at the end. We would  focus on a couple of things a week and then when we reported back, we were telling ourselves as well as everyone else: Hey, did we do this? Did we not do this? It also helped us understand where we still had more work to do. We still talk to Kieran about our project and the mentorship from him has been incredible as well. So, D2P really has helped us in so many different facets. Anything from just the basics like how many people we needed to talk to, to just helping us think about things from a different perspective. D2P really helped us figure out our space.

What other programs helped?

We got assistance from the Law and Entrepreneurship Clinic, where Wisconsin entrepreneurs can get free law advice—you don’t find that anywhere else in the country. On top of the UW stuff, there are other accelerator programs and accelerator networks that are made to help entrepreneurs. For FoodChain, we were in gBETA and Madworks. Prior to FoodChain, I also participated in gALPHA with a different project.

What advice do you have for other campus innovators just starting out with an idea?

Use the resources that Madison has to offer. There are an insane amount of resources in Madison—one thing we learned from D2P and the Igniter program is that so many people have great information. You can talk to professors you’ve had classes with, or even those you haven’t. In my experience, pretty much everyone I reached out to was open to talk to me. I gained so much knowledge from just reaching out to professors and asking to just pick their brain for fifteen minutes. They’ll talk to you and often give you five more people to talk to as well. It gives you a new perspective, which is always important. With so many resources in such a small place, I think Madison is the ideal place to start a business.  There are so many connections. From what I’m learning, the Wisconsin alumni network is also incredibly friendly and helpful—I’ve reached out to alumni on LinkedIn or Badger Bridge, and they always respond. I’ve talked to alumni in Israel, Germany, all over the world.

To students specifically, I would say—if you think you have an idea that has any kind of credibility, just do it. The younger you are the better. The older you get, the more risk averse you get. And you really want to take advantage of this time that you can really do whatever you want. It’s not going to set you back in life at all, and there’s no better time than the present. I think that that’s important to tell students, because some people are like, oh, I’m too scared to do it. I think you just have to do it. It will succeed or fail, but you’ll learn so much along that way that it’s totally worth it. It’s such a good learning experience. I have learned more in the first six months out of college than I did in the last twelve months of college, just talking to people and doing real-life case studies.

How did you balance starting a business with being a full-time student?

It definitely takes a certain amount of balance. But, I mean, I was doing two companies during school and I definitely had my fair share of fun while doing it. So school is daunting, and there are times where it can be a little bit overbearing. But if you can just find one or two hours a day, or five hours a week to put aside to work on your business, that’s how it works. It’s the same as making time to study for a test. Send a few emails, get a couple of calls in. It really makes all the difference. Me personally, I would sometimes prioritize my businesses over homework or something like that. But usually I would just spend a little bit of a later night doing the homework. School is made so that you don’t have to spend 40 hours a week doing school and nothing else. I think that you can find time to make both work.

What drives you personally?

I’ve always thought of myself as an entrepreneur. Starting at the age of ten, I was coming up with ideas to make my own businesses. Designing t-shirts and then going into New York City to sell them in street, stuff like that. I was always grinding away, and I knew that I wanted to work for myself. I wanted to make an impact on both the world as well as be able to walk at my own pace. I’m always looking for that next idea. Always. I mean, my brain’s just like that. On my phone I have a notepad, and every day when I think of new ideas, I record them there. That’s what gets me up in the morning. That, and being able to advance an idea that is combating something that I feel passionate about. FoodChain has multiple impacts on local economies and the environment.

We got acquired on April first (2020), and we relocated our headquarters down to Milwaukee, but we still operate out of Madison. We’ve got a total of seven people working on our team.

Our core service is wholesale, selling local produce to restaurants, grocery stores, and corporate campuses. But COVID disrupted that core service, so we recently pivoted and have started also working with food pantries on meal delivery kits, helping them integrate local foods into their pre-made microwavable meals that they deliver to families in need. Another pivot was in response to the fact that farmers markets are also struggling during this time. We made an alteration to our platform so that it can help farmer’s markets offer online ordering and curbside pickup offerings. Most of our clients right now are in Madison, but we’re focusing on building out the Milwaukee market, and expanding our client base there.