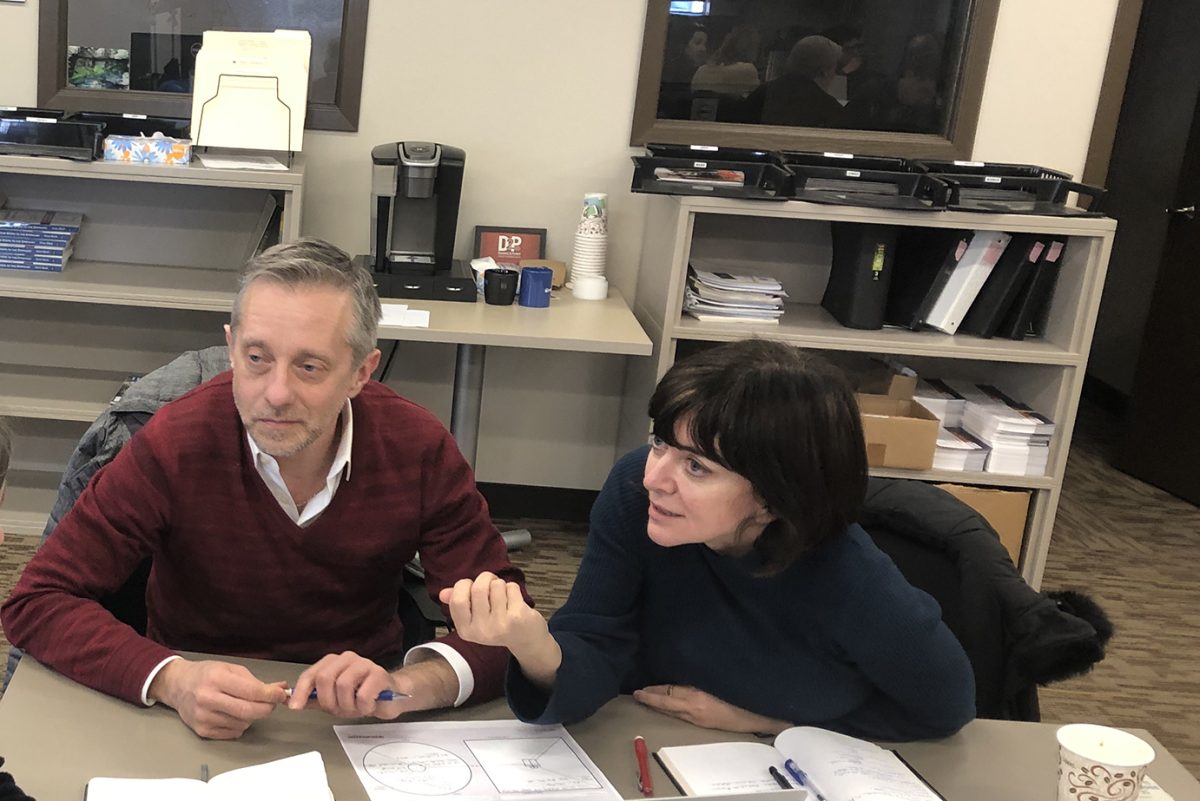 Friends and collaborators Paolo Desiati and Elena D’Onghia don’t work on the same issues in their different roles at UW–Madison, but they share a passion for solving big problems. Together, they are developing magnetic shield technology to make human space exploration safe. Desiati is a senior scientist at the Wisconsin IceCube Particle Astrophysics Center, where he coordinates operations of the IceCube observatory with science working groups and investigations on neutrinos, subatomic particles that travel to Earth from space. D’Onghia is an associate professor in the UW–Madison Department of Astronomy, where she studies the motion of stars, gases, and galaxies to understand the dynamic processes that form the stellar skeleton of our own Milky Way galaxy.

Pre-pandemic, the two met weekly for coffee and brainstorming at a local café in Madison. During one of those sessions, Elena mentioned Elon Musk’s SpaceX initiative to send people to Mars, expressing concern for how astronauts would be protected from harmful cosmic rays. Away from Earth’s protective atmosphere, space travelers are exposed to dangerous levels of radiation. A trip to Mars could be fatal. Elena and Paolo decided they needed to do something about it. With help from D2P mentor Kieran Furlong and participation in D2P’s Innovation to Market and Igniter programs, they have started to pave their way from science fiction to developing a solid concept that can be implemented.

“Elena and Paolo have been a pleasure to work with, and I think can be a model for other researchers on campus,” says mentor Kieran Furlong. “They were excited to apply their mutual smarts to solving a big problem that humans will have to deal with if (when!) we start interplanetary space travel. Other potential use cases for the technology kept coming up as we brainstormed ideas. Their project has also informed their research and opened up new avenues for grant-funded research too. So, I think they are a great model for how entrepreneurial thinking doesn’t just have to be about commercializing a product. It can also feed back into on-campus research.”

We sat down to talk to Elena and Paolo in summer 2020 to get insights on their role as campus innovators and lessons learned in developing Halbach Torus, their magnetic shield technology.

How has D2P helped you, and what have you learned along the way?

Paolo: With D2P, we learned about how to transform a conceptual idea into a possible market product. It was a blast. I learned things that I had never thought about. I had heard about business models, but I didn’t know what that meant. What was really exciting for us was the customer discovery—basically it pushed us to talk to people. Every time we interviewed someone, we discovered something really interesting that we did not expect. D2P gave us a method; a different way to see things.

Elena: I have to say, D2P was beyond anything we had imagined. It was intense, but really, really useful. I couldn’t believe there was anything—free for us and based at the university—that could help us so much. Kieran was a big discovery for us also. His way of connecting things is unbelievable. It opened a world in front of us, because we were very much fixed on one idea. And you have to know that scientists are obsessive people. It’s very difficult for us to jump in a different direction, because we’re kind of stubborn to arrive at the result. For me in particular, doing the classes with D2P and working with Kieran was extremely interesting for this reason, because forced us to try and think differently.

During the course, you pivoted from your original idea. Tell us about what you learned.

Paolo: We started with the ambitious idea of designing a magnetic field system that would protect humans during long-duration space travel. Other people have tried to solve this problem, and their conclusion was that technology was not yet ready to provide a viable solution. Because of that, we decided to pivot to something that could be closer to market adoption, protecting spacecraft instrumentation from space radiation. But talking to people, we learned that there is already some mitigation in place, so the need wasn’t there.

Elena: Instrumentation would have been a short-term idea with more immediate application, but recently there’s been a lot of push from NASA and the government to go back to the solar system, to the moon, and actually to Mars. If we solve that problem, which is very challenging, automatically it would open many other applications. So, we are back to thinking big.

Paolo: New hurdles need new solutions, and new solutions need us to think outside of the box. It is clear that human space travel cannot begin if we do not find effective ways to protect astronauts from the harmful effects of space radiation. We must be in this game, even if it is challenging.

What other entrepreneurial resources/programs have provided guidance to you?

Paolo: In addition to D2P, we also have attended the SBIRReady program in June 2020. We have not taken the step of starting a company at this point. We have disclosed to WARF an invention pertaining a novel magnetic field concept we have developed (the Halbach Torus, or HaT). In addition, we are looking into the NASA Innovative Advanced Concept, for which we have submitted a proposal for Phase I (feasibility). We plan to apply for UW2020 grant as well, and we seek other opportunity to start transforming our concept into a prototype. In this journey, we’ll partner with engineer and physicist colleagues for the construction and testing of our prototype.

Do you think of yourselves as entrepreneurs?

Elena: We never thought about ourselves as entrepreneurs. I think what we really would like is to be pioneers. Society tends to put people and things in categories, but I never liked them, because I don’t ever fit—I always feel different, all the time. Kant was a physicist, alchemist and philosopher. Tesla was a scientist who was also an entrepreneur. Leonardo da Vinci was a painter, an architect, an engineer—he was many things. Today, everyone is specialized to have a lab. I am an astronomer, sure—but I also want to be a pioneer with Paolo in this adventure. One thing that I like about the word “entrepreneurship” is that things have to go. You have a deadline, you have a time, and you have to go. I apply that to my research also.

Paolo: Entrepreneurship is a different way of presenting your ideas to the world. You can’t just say, “I have a great idea.” If nobody’s going to use it, why do we care? There’s always a balance between having a clear idea of what you want to do and creating something that people may want and will use. So that was very different from the world we live in as academics, but it opened a whole new world of really exciting things.

What is your advice for other campus innovators?

Elena: Follow the impossible. We were told “this is not possible” by more than one person. But this is what the pioneers do– they do something that hasn’t been done before. Ideally, our company would be named Leonardo Advances—because Leonardo da Vinci put his bar very high. We chose something big. We didn’t choose something little.

Paolo: Never stop believing in your curiosity and imagination. A good team is very important to feed each other with more curiosity and push forward. Elena and I are a great team. Through D2P, a new world has opened ahead of us that gave us more faith in our ideas. We know that other people are working on the very same concept and idea. But we believe we can be part of this new wave with our own ingenuity. I think it’s also interesting to point out that this project is really not our research.

Elena: I agree. I think people sometimes assume they cannot do something else other than just their work for which they’re paid. But it’s not true.

What drives you/why is this project important to you personally?

Paolo: The topic of space travel is fascinating, and we clearly see that the obstacles laying ahead of this new space era seem unsurmountable. But like any other human adventure (from the first step into the Ocean beyond the Hercules Pillars, to the crossing of the Ocean that lead to the discovery of new lands by Europeans, from Sputnik to the first steps on the Moon) it will require human ingenuity to find a way to bring humans safely through space. Elena and I want to be part of this journey, using our resources and tapping into others that are already applying their expertise to push technological advances forward.

Elena: Life can be short. I realized that my knowledge can serve for a big problem that can help humanity in its advancement. The right time to start is today!